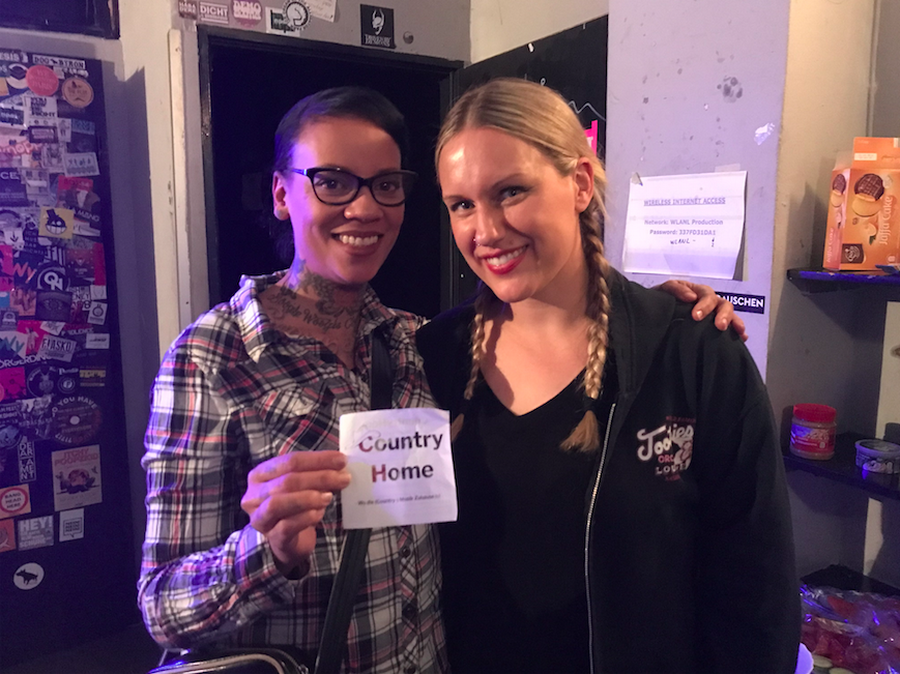 On the 7th of March 2018, the American Country duo American Young, played as support act for the Canadian Country duo High Valley, at the Luxor Club in Cologne, Germany.

Their self-titled EP was released in 2014, followed by their debut album AY, which was released on Curb Records.

Songs by Jon Stone as songwriter includes hits like “Me and My Gang” (Rascal Flatts), “Seven Days” (Kenny Chesney), “Kiss My Country Ass” (Blake Shelton) and “A Woman Like You” (Lee Brice).

Kristy Osmunson inspired the scene for years as a violin player and founding member of the group Bomshel.

The Team of CountryHome had the honor to meet Kristy, after their show in Cologne, for a short interview, and what should we say?

The warmth and good vibes American Young are spreading on stage also surrounded us backstage during the interview.
Kristy Osmunson and Jon Stone are not only two incredibly talented musicians, no, they are just wonderful people and we are looking forward to a next concert from and with American Young!

Jess: Hi Kristy, it’s so nice to meet you. your show was great! How do you like Germany? Did you see something of the city?

Kristy: So Germany is amazing, we went to the cathedral today and it was incredible, amazing. Oh my gosh! Goosebumps everywhere. And to see the architecture it was so old but also intricate and artistic and it tells a story. Everywhere we go I’m just kind of… Blown away with the depth of culture and I think the language — we were talking about this on the train today — I think because the German language is so precise and it’s so um, its very defined and I think that that — as weird as this is — I think that it makes an impression on the culture and so everything is laid out perfectly. The roads are laid out perfectly! The train stations are laid out perfectly. It’s incredible! I love it, I love Germany.

Jess: Wow, you seem to be really excited. So it’s not your first time in Germany?

Kristy: No. My dad lived here and went to high school here.

Kristy: It was a little private school, like in Southern Germany. I forgot the name of it, I thought it was by Düsseldorf but we’re sort of by Düsseldorf. It was a little town and it was an hour and a half from any big city. and we went and listened to the preacher that was running the school when he was there. The same minister is running the school now. So that was crazy. But he grew up in Africa and he spent his high school over here and so he speaks German and he loves Germany. My Aunt lived here for most of her life after Africa. And so my family is very connected to Germany. My cousins work over here.

Jess: It must be exciting to see all the things your family is so attached to?

Kristy: Yeah and when we come over here and we go to see the cathedrals, I think the churches have so much impact and influence on music, you know what I mean? They really are so… Um… They’re just so beautiful.

Jess: I know what you mean, its just so … big

Jess: You cannot describe it with words, it’s just coming over you.

Jess: Let’s talk a little bit about your album. you also played new songs tonight, so we can look forward to a new album?

Kristy: Yes, we played a couple of new songs tonight and that’s always fun and exciting and we are in the middle of working on a second project where we are going to be in the studio with producer Jim Ed Norman.

He helped produce Emmy Lou Harris and he did all the strings on the Eagles records and he helped produce The Eagles. He’s just a legendary producer and we’re very blessed to be able to work with him.

We’re going to be tracking at Curb Records, and using probably the same band as our guys,- Unless we’re coming over here-, Our guys are pretty consistent. So, yeah, I’m just really excited to get back into the studio and make some new music.

Jess: So we can hope you’re coming back?

Kristy: Oh yes, I’m trying to get back sometime in June, hopefully.

Kristy: Yeah, in June, that would be great. I feel like we’ve just started to work Germany like this is really our third show in Germany, isn’t it?

Kristy: Yeah, country music is making a world wide impact. It’s so beautiful here, just so incredible. The people are amazing and we’ve gotten to experience some of the local music, which has been amazing and, just, every time we get to experience a culture through music it’s life changing!

Jess: Kristy, thank you for this great interview, and I really can’t wait to see you again.

Kristy: I have to thank you and I look forward to being here again soon.