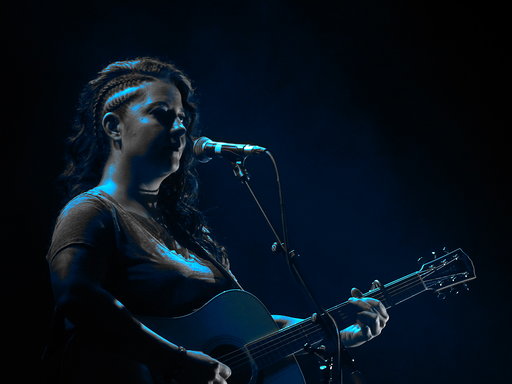 Unfortunately she did not accompany Luke on the mainland dates in Amsterdam and Berlin. She instead played her own show in London on Wednesday, so we decided to visit her there.

The English fans, who have admired Ashley since C2C 2018, were already waiting outside Islington Assembly Hall at noon to definitely catch a spot in the front row.

The show was completely sold out for weeks and at 19 o’clock the doors finally opened.

Ashley, who had prepared a 12-title setlist, which was probably the same as on her Luke Combs support shows, changed the set at the beginning of the show and said she could not possibly play the same program, it’s her own show and she has every time she wants and she can do whatever she wants.

She appeared, as in all European appearances, alone and only with her acoustic guitar and that’s what made the concert even better.

Of course she played songs like “Radioland” or “American Scandal” from her current album, but there were also some cover songs like “Stuff that works” or “Good Country people”.

She also responded to repeated calls from the audience and then played just what people wanted to hear. So it came to a very emotional moment as a young man was asking for “Amazing Grace” and after a short consideration, she tuned this song, and then only to conduct because the entire audience was singing loudly.

After 14 titles plus 2 encores, there was really only one thing missing, namely the title song of the album and when the first notes sounded, the audience was unstoppable. At times, people were louder than Ashley herself.

After more than one and a half hour, Ashley said goodbye, and promised to come back soon.

We were fortunate enough to meet her before the concert, where she told us that she would come to Berlin in March 2019.

We can only recommend all country fans to listen to this woman and take the chance to see her live.