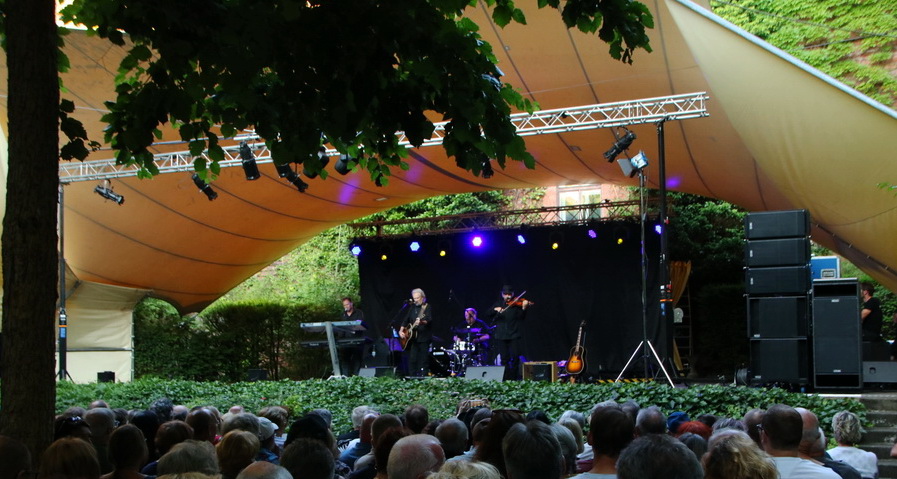 On his European Tour Folk- and Countrymusic´s legendary songwriter also paid a visit to Germany.

After two wonderful concerts in Essen and Munich his last tour concert for 2018 took place at Nuremberg´s Serenadenhof.

For Countryhome.de this has been the first event in this ambience. By entering the inner yard I was overwhelmed: The Serenadenhof once had been part of former Nuremberg Rally and is a historic building. In the summer time huge Open Air- Concerts regularly take place here. This place is awesome for happenings like these. 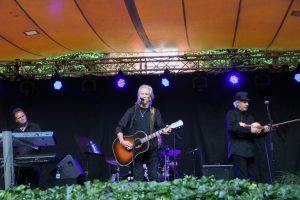 The successful Texas- native singer & songwriter Kris Kristofferson opened up his show to the magical sound of „The Strangers“ with his song „Shipwrecked to the 80´s“ which immediately transmitted a special emotional feeling into the stunning acoustic of the old location.

„The Strangers“ are, as real fans sure can remember, Merle Haggards´s musical fellows including Scott Joss (Guitar & Fiddle), Doug Colosio (Piano) and Jeff Ingraham (Drums). Country Music´s penultimate (living) „Highwayman“ next to Willie Nelson couldn´t have made a better choice for his musicians on his tour: The band visibly „lived” their music as a unit, inspired each other´s powers and supplied a very harmonic interaction to the audience. Fantastic!

Additionally, neither did they take an intermission nor a short break for even a sip of water. The great senior musician and his band seemed to be blown away by the cheering audience. Chapeau for this much energy!

And speaking of Merle Haggard´s former band (former musical fellow of Kristoffersons´ and famous musician/ songwriter had unfortunately already passed away in 2016 on the very day of his birth) – his spirit still remained by incomparable songs being performed, such as „Okie from Muskogee“ (duet by piano player Doug Colosio and Kristofferson´s amazing vocal guest Scott Joss), „Daddy Frank (The Guitar Man)“, „Ramblin´Fever“ as well as a number of older songs by „The Hag“ which brought heaps of goose bumps to the delighted audience. Thus, this concert has – besides a ride through Kris Kristofferson´s musical history – also been a wonderful homage to „Big Merle”. 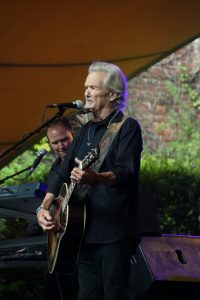 Mr. Kristofferson – „The living legend“ – performed his popular songs and – as well – titles which have not been heard for a long time on his concerts. Fans could dream and sing along to treasured songs such as „Me and Bobby McGee“, „Casey´s last Ride“, „Sunday Morning coming down“, „Jody and the Kid“, „From here to forever“ and „The Pilgrim Chapter 33“, just to mention a few of this night´s super hits.

After more than 20 Songs being performed by songwriter- hero Kristofferson and 90 minutes concert feeling at the finest he waved his fans goodbye with tunes like „For the good times”, „Why me“ and his customary last song „Please don´t tell me how the Story ends.“ 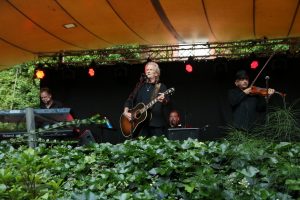 I have to say there is nothing more real, relaxing and enchanting than sharing a summernight on mild temperatures with wonderful music of a first- class songwriter surrounded by an amazing backdrop as Nuremberg´s Serenadenhof. These are the feelings you´ll always think about and never find the words to describe.

Of course, Kris Kristofferson attracts people from all parts of the world and all ages and sorts. We even met fans who had already been to his concert in Munich the night before. Germany´s famous and awarded singer/ songwriter Dannyjune Smith who – as her fans already know – worships and since early childhood has been inspired by Kristofferson´s work even came from Frankfurt to see her lifelong hero on stage and had a little chat with his musicians backstage.

Countryhome respects Kristofferson´s power and ability still being there for his fans at an age of 82 travelling around the world and spread his amazing spirit and pleasent sense to the people who have been loving him for so many decades.

As the last sentence of his o. m. last song says „Please don´t tell me how the story ends“ we are hoping and praying being able to visit and watch numerous future concerts of this big man of music. No question: We would join them all! Kris, please come back for Germany in 2019!

Gladly find our gallery of pictures from this amazing night right here: